We hopped off our plane in Johannesburg on the morning of December 26th, the day after Christmas.

The entrance to the Apartheid Museum

In the months leading up to our trip people would always warn us to be careful and safe, more so than other trips we have gone on. People are usually afraid of the unknown or locations they don’t usually travel to. But yes, when we travel, safety is always a top priority. When we arrived, we decided to take an Uber to our hotel. The drive would take about 30 minutes from the airport and this was our first experience in South Africa. There is a lot of poverty and unemployment in South Africa, just something to be aware of as a tourist. Halfway to our hotel there was a boy that looked like he could have been 12, sitting on the side of the road. His clothes were worn. Our driver stopped the car and said he was going to get out and help the boy, we said sure. Now at this point Charlene looked over at me a little concerned with all the warnings we had heard. The driver went into his car trunk and pulled a bag of food out and handed it to the boy that was sitting along the side of the road. He came back into the car and said the boy was there when he drove by before and looked hungry. I will remember this for quite a long time, it was a quick lesson on the issues that some black South Africans confront every day.

We arrived at our hotel, African Pride Melrose Arch. The hotel wasn’t downtown and was almost like a gated community with little shops and restaurants. You will find that there are gates/wire gates on most hotels and properties in Johannesburg. The hotel was really nice/clean and we ended up staying there for a couple of nights while we toured the area. 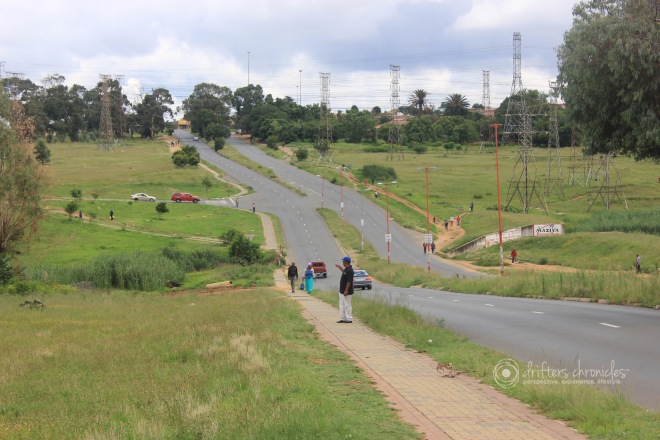 The next day we had a day tour, to see some of the important tourist/historical sites in Johannesburg. The name of the company was Felleng Tours, they picked us up from our hotel for a full day tour. We visited Soweto which was the region that the apartheid/white government set aside specifically for black residents. Soweto is the largest black population of its kind in the country.  There were many people selling unique arts and crafts. We stopped at Regina Mundi church which was significant because black people were able to organize their movement inside as meetings in public places were banned. We also visited the Soweto shanty towns, this is the region in which there is a lot of poverty. You never get a grasp for the wealth inequality that exists in the world until you visit. I would say that for me visiting this area was eye opening. I’ve obviously heard that these regions exist but to visit them and see it with my own eyes and socialize with the people was something very different.

We visited the colourful Orlando towers, I didn’t dare go bungee jumping though. That is also where we had a bbq lunch, which we really enjoyed.

Later in the day we stopped at Mandela House/ Mandela national museum which was extremely busy with tourists but well worth the wait. There were important photos, documents inside which is one of the things you obviously need to experience if you are there. We finished our tour day by visiting the Apartheid museum. The museum was very well done. It showed the true history of the country and the struggles of blacks during the apartheid era in South Africa. To enter the museum they give you a card, to enter as a black person or a white person to illustrate what it was life in the apartheid era.  As me and my wife are an interracial couple, we entered our assigned door. I sent a picture to my mother with me and Charlene entering the museum and she said wow, this is still happening down there and I had to tell her that we were actually at the apartheid museum but decided to take a picture :). That picture is at the top of the page. 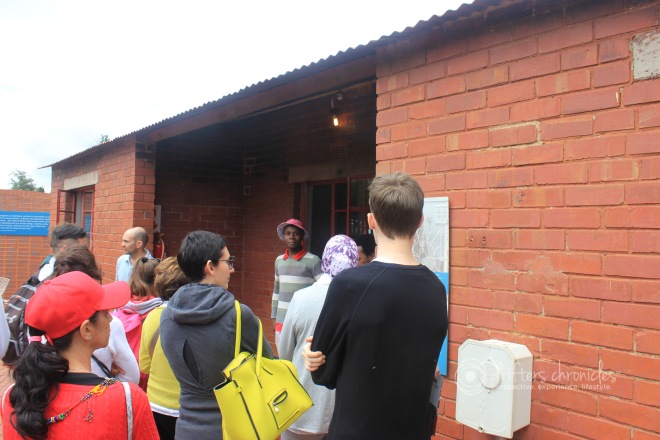 The line up to get into Mandela House

After three days in Johannesberg we drove to the Airport to get to our next destination…the Drakensberg mountains.