” It is our choices, Harry, that show what we truly are, far more than our abilities” Albus Dumbledore

While in London we had the chance to visit the Warner Brothers Studio for Harry Potter. What an experience! If you are a fan of the Harry Potter movies this is a must. The studio was very detailed and had just about every prop that you can think of from all of the movies while also showing how they did some of the magic from the movies.

We booked our tickets online and had a rental car to get us to Watford which is just outside of London. There are many ways to get to the studio including an official bus and a train out of London but we were coming from the Lake District so we just drove down and of course we got lost. Our tour time was for 1:50pm and we were about an hour late. We spoke to one of the tour reps and we had no problem getting in. What I didn’t realize was how many people were doing tours throughout the day. The place was packed; filled with young and old people alike. You actually don’t realize how many people there are while you are doing the tour because it is broken into groups.

We started off by watching a brief welcome film about the movies and the tour. Then the screen went up and we had arrived at Hogwarts.

The entrance to Hogwarts

The doors opened and we found ourselves in the giant hall/cafeteria from the movies. It was quite spectacular. All of the costumes from all of the different houses were placed on mannequins throughout the hall (Gryffindor, Slytherin, Ravenclaw and Hufflepuff). Once you made your way to the front of the hall, you could see all of the mannequins of the various teachers. 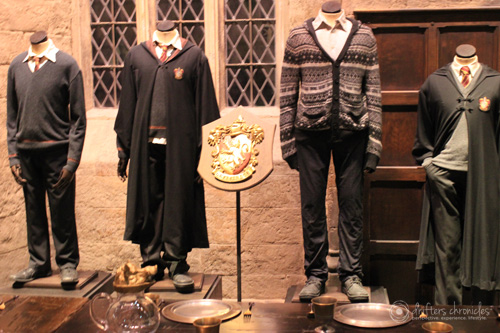 From there we made our way into the main studio portion of the tour. It was here that they had all of the props and sets used in the movie. I’m sure you can recognize some of them. My favourite had to be Dumbledore’s office. You really get a sense of how much creativity and detail JK Rowling used to create this dynamic place. 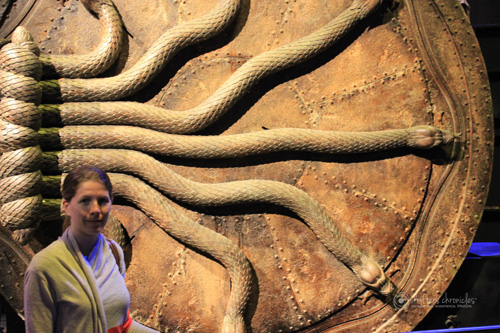 Oh yes and I nearly forgot… we walked down Diagon Alley. I remember watching the movies thinking that I wanted to visit the United Kingdom because everything looked so old in the movies . Cobblestone streets, old buildings, stores along the street (not a mall)… I loved it. 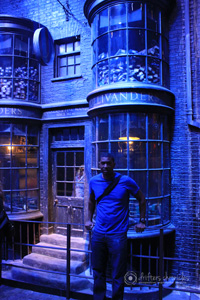 Most people know that the castle used in the movies is not real and that the scenes of a castle in Harry Potter: Chamber of Secrets were in fact Alnwick Castle. They used a model castle the size of a room and that is the castle that everyone saw in the movies. It was very interesting when you think about it.

Finally we made it to the end of the tour and entered the gift shop. We picked up a couple collectible wands. Charlene got the Hermoine Grainger wand and I got the Albus Dumbledore wand. The wands aren’t toys and are very real looking.

Oh yes and we saw the studio home where Harry Potter lived…anyone recognize it? And how about that tiny bedroom below the staircase?

The Smallest Bedroom Under the Stairs.

If you loved the movies as much as we did, you should absolutely make sure you stop at the studio next time you are visiting London.

Keep an eye out for our next Harry Potter post!